I want the block to remain moist in all conditions
Share

Antoni de Bruin of ACB Agro in Klazienaveen has high demands when it comes to his slabs and blocks. On one half of his business he cultivates cucumbers first, and then sweet peppers from spring onwards. To ensure perfect conditions for the sweet peppers, he has selected Grotop Master slabs in combination with Plantop NG2.0 blocks in the combi greenhouse. "I want the block to remain moist in all conditions."

Antoni de Bruin is a jack-of-all-trades. In addition to his six-hectare farm, he is an independent crop consultant, with a ratio of around two-thirds to one-third. "But I do work more than 40 hours a week," he admits. His style is practice-based and he mainly advises cultivation managers at larger greenhouse vegetable businesses.

His business consists of two locations, each three hectares in size. Location 1 is a lighted business where he begins with cucumbers in winter, and then green sweet peppers from spring onwards. "I chose the 'Red Wing' variety; it colours slowly and is resistant to the tomato spotted wilt virus [TSWV]."

At location 2 he grows yellow sweet peppers all year round. "The yellow variety 'Sven' takes up 25% of the farm, and the remaining 75% has a new variety that's still under number (E20B.0308) and won't be given a name until this summer. This new variety is resistant to tomato spotted wilt virus too; it's just not yet available in sufficient numbers for the entire business."

The choice of slab varies from location to location. This year the grower has selected Grotop Master slabs for the lighted crop. "During cucumber cultivation, I steer the crop towards vegetative growth by irrigating often and in large quantities. During the sweet pepper cultivation that follows, you need to go back to less frequent and less plentiful irrigation. Last year I had Prestige 10cm high for cucumber cultivation. This slab is very well-suited to striking roots quickly, but due to the move to a different irrigation strategy for sweet pepper cultivation, we've opted for Grotop Master in the combi greenhouse this year. The sweet peppers have been on it for four weeks now and the slab is really nicely rooted from top to bottom. For the unlighted crop we chose Supreme slabs due to the fast and uniform root striking, and the generative boost around the time of the first setting."

Antoni has made an excellent choice according to Thomas Peters, Cultivation Specialist – Propagation Worldwide at Grodan. In this specific growing system, its hardened top layer makes the Grotop Master ideal for lighted combi cultivation. "This choice has meant that it’s safer for him to start with sweet peppers after his cucumber crop. For unlit crops he uses Supreme slabs. These slabs have been specially developed for sweet pepper cultivation. They're uniform and enable easy steering of the crop."

De Bruin asked his propagator for Plantop NG2.0 blocks. They are a good match with both of the slabs he uses, and work well with the slab in terms of water content and EC. He selected a block with duo plug holes. According to Antoni, this means that the plug is further away from the foot of the stem, with the advantage that the water trickles easily into the block throughout the growing season, so overflowing blocks are not an issue. This maintains a more uniform water content both within and across the blocks.

Antoni attaches great importance to having the block remain thoroughly moist throughout cultivation, whatever the conditions. “If you have a Grodan slab with another block on top, you'll see those blocks dry out. It’s important that the block stays moist at the top, by the base of the stem. That's the place where the plant creates new roots. If that doesn't happen properly, you lose volume and growth."

He sees even more advantages. One is that the water content remains as even as possible in the block, 24 hours a day. At night, the plant shouldn't be taking water from the block rather than the slab. He also thinks it's important that the block doesn't get too wet. If the slabs and blocks are too wet, this leads to a lack of oxygen which leaves the plant more susceptible to Pythium.

De Bruin has no problems with thickened or diseased stems on his sweet peppers. This is thanks to a number of factors: tilting the plugs and preventing slime developing, in combination with the irrigation strategy. For sweet pepper plants, the plugs are always tilted 90° to prevent stem disease. "The plants are grown by Valstar Plant Nursery in 's-Gravenzande. They tilt the plugs 180°. We never have stem issues with sweet peppers."

Obviously this goes hand in hand with the irrigation strategy. De Bruin now has ten Grosens sensors for the six-hectare business. "When we plant the sweet peppers, we begin by placing these sensors in the blocks. We irrigate based on the average of the values measured. After around four weeks – once the plants are sufficiently rooted in the slab – we take the sensors out of the blocks and insert them into the slab. Then you steer based on the slab." 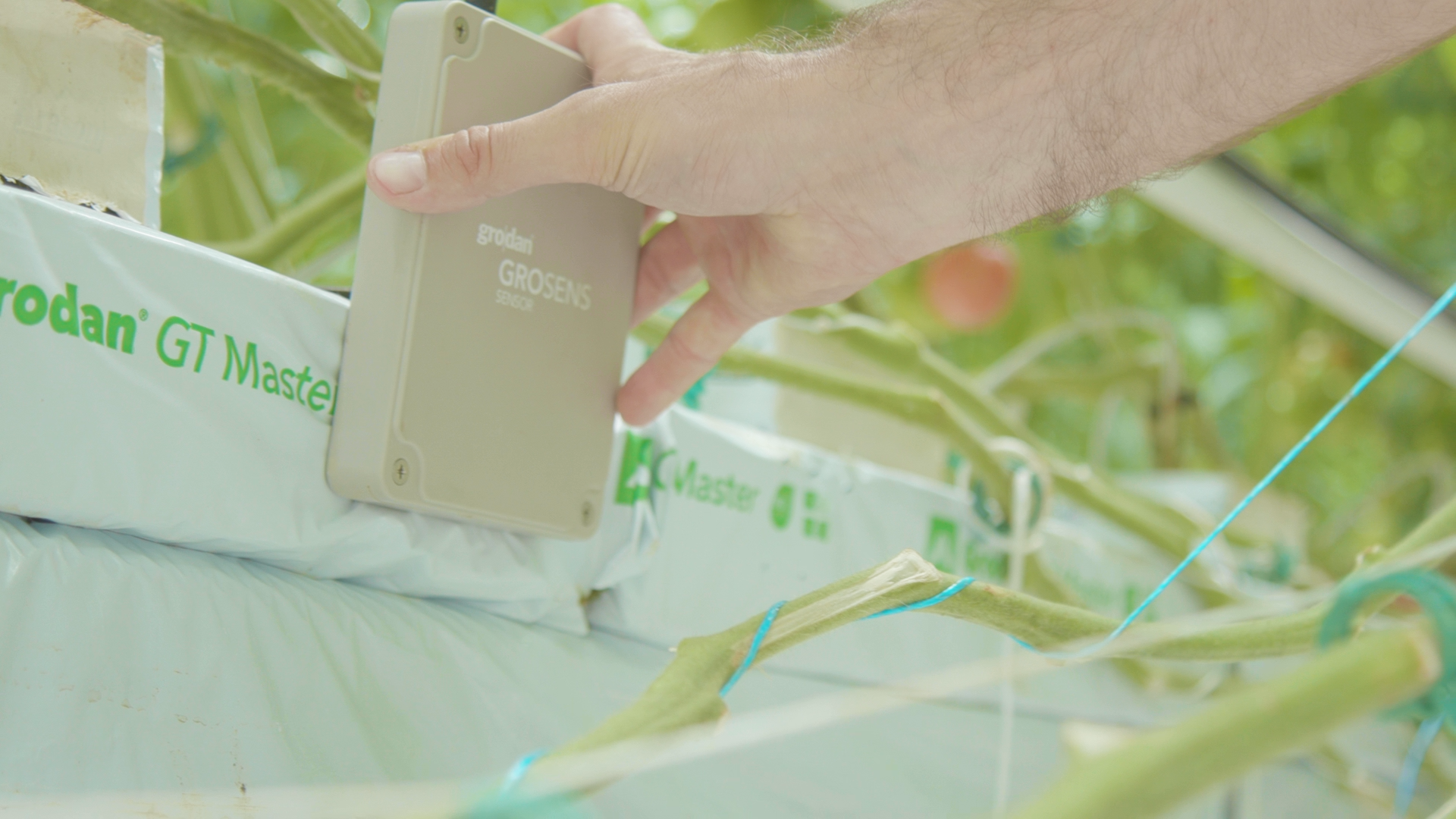 There are a few more points that the grower is able to monitor well using the Grosens system: "We make sure that the slab and the block aren't too wet at the start of the night. We prefer fewer but longer sessions, rather than shorter more frequent ones. We aim to irrigate less than four times an hour. If you irrigate too often, you run the risk of slime developing."

"The initial phase is crucial for any crop," Thomas Peters says. "During this phase, the roots are still in the block. It’s important to steer with this in mind. But even when the sensor is removed from the block and placed inside the slab, the block still has a job to do: it needs to stay moist enough."

Antoni de Bruin of ACB Agro in Klazienaveen has high demands when it comes to his slabs and blocks. To ensure perfect conditions for the sweet peppers, he has selected Grotop Master slabs in combination with Plantop NG2.0 blocks in the combi greenhouse.