Sander Berkers of Moors sweet pepper nursery is someone who loves a challenge. He's constantly looking for ways to improve yields, quality and sustainability. Good plant health is essential and starts with the roots. The right block-slab combination allows Sander to ensure a healthy root system. He has chosen a special sweet pepper slab in combination with matching NG2.0 blocks.

Moors sweet pepper nursery is 19 hectares in total, spread across two locations in Heusden-Asten and Someren. It's an innovative company that is regularly in the news. The most recent development is the construction of a five-hectare greenhouse with diffuse glass in Asten.

This year the red variety 'Redline' will be cultivated on 13 hectares, and the yellow variety 'Gialte' on six hectares. The planting dates were between 5 and 11 December.

They've been using Grodan slabs and blocks for as long as Berkers can remember. Currently Supreme slabs are in use. "We often do trials with Grodan. Four years ago we held a field trial here. At that time we cultivated on 7.5cm high Vital slabs. During the trial, we compared those with the 10cm high Supreme slabs."

The higher slab was an improvement on the 7.5cm high standard slab. "One important advantage was that we could easily do an extra session in the morning or go longer in the evening. The extra height means that there's still enough oxygen in the slab. Over time that means healthier roots. On top of that, the result is even more reliable because the Supreme slab is just that bit more steerable." Berkers notes, however, that at that time the Vital slabs still didn't have the new NG2.0 technology, while the Supreme slabs did. The sweet pepper plants at Moors have been cultivated on Supreme slabs for a number of years now.

Thank you for your request

Thank you for your request

Berkers deliberately selected a block that goes well with the slab. Until now Moors has mainly had experience with the ProPaprika blocks. This year Berkers will conduct a 1500m² trial comparing the current blocks with Plantop NG2.0 blocks.

They saw improvement right from the start of cultivation. "The Plantop NG 2.0 blocks were slightly more uniform. The water content and EC are more even, both within and across the blocks," says Thomas Peters, Cultivation Specialist – Propagation Worldwide at Grodan. He took measurements when cultivation began at Moors sweet pepper nursery.

At the beginning, Berkers noted that there was better root formation from the foot. During cultivation he saw good steering possibilities, and also observed that the blocks do not stay too wet on the top. "The water content and the EC are nicely uniform and are better distributed across the height, but where Plantop NG2.0 really stands out is in the distribution of the roots throughout the block. That is most definitely progress."

Berkers' default choice is a block with duo plug holes. "With the duo plug hole, we place the plug as far away from the plant hole as possible. The water trickles into the block easily, and the foot of the plant stays dry."

So far, the effects of the Plantop NG2.0 block combination have mainly been positive: the water content and EC are nicely uniform and better distributed across the height. At the beginning there was better root formation from the foot.

Block and slab work well together

Berkers is also pleased with the way that the Plantop NG2.0 block and the Supreme slab work together. "For the plants to take root well, it's important for the slab to be sufficiently moist at the top too, so the roots don't need to go through a desert before doing anything else. Too wet isn't good either, because then you have problems with diseases like Pythium. So you want a pot that's a good match with the slab." 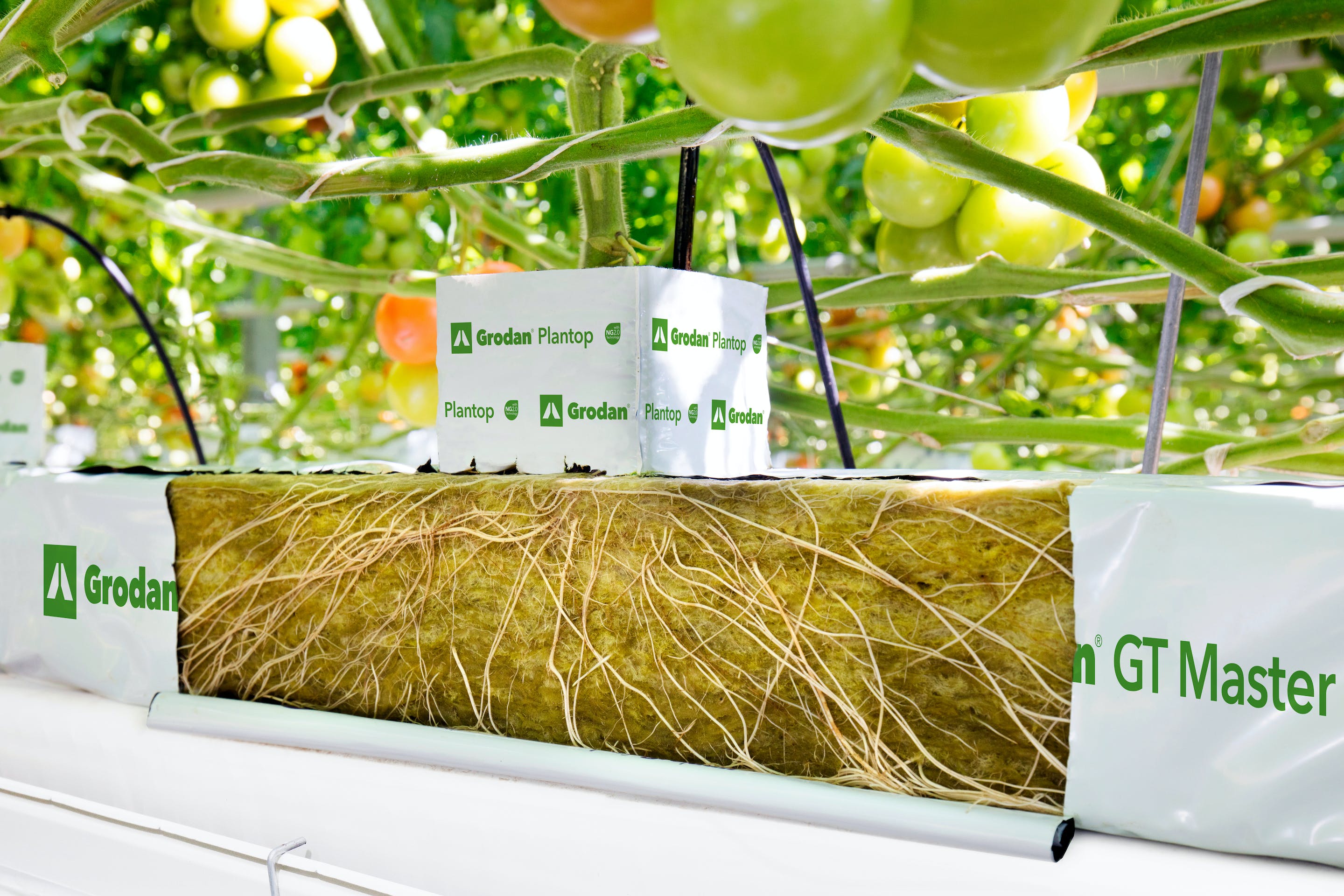 In Berkers' experience, the block plays an important role in the first phase of cultivation in particular. However, the blocks remain important even in summer and autumn. "They have to be well-matched to the slab in terms of water content." Peters stresses that this is why it constant monitoring of the block is so important.

This suits the grower, who is keen to support his green fingers by taking precise measurements. He has a whole range of sensors hanging around the plants in order to optimise the climate. The same is true of the root environment. He has used Grodan's water content meter (WCM) for years, and when the GroSens came on the market he was one of the first to measure water content and EC. He has four Grosens sensors per greenhouse.

"With the GroSens you're able to take readings at more heights. For the first six weeks we put half the sensors in the block and the other half in the top of the slab. For the first two weeks the plants are striking roots, and then distributing the roots throughout the slab. After this initial period we moved the sensors to the normal position – underneath and in the middle of the slab – and used the readings to determine the irrigation."

The grower is confident about how the season will progress. "The plugs, blocks and slabs have stonewool with the same new NG2.0 technology. The block will continue to make a contribution through to the end of the year," Peters predicts, based on practical experience.

Antoni de Bruin of ACB Agro in Klazienaveen has high demands when it comes to his slabs and blocks. On one half of his business he cultivates cucumbers first, and then sweet peppers from spring onwards. To ensure perfect conditions for the sweet peppers, he has selected Grotop Master slabs in combination with Plantop NG2.0 blocks in the combi greenhouse.