Hen Groenewegen after 10 years of experience: ‘Grodan Grofit is tailor-made for gerbera cultivation’

Grodan Grofit is the preferred substrate for gerbera growers. The stone wool cubes come in a pot, covered by a solid, 2 cm thick stone wool disk, ready to use. Colours of Nature members swear by it. “All but one of us are using it”, says grower Hen Groenewegen of EveryD Flowers. “Consistent quality, an easily controllable water balance, vital roots and sufficient firmness during harvesting; that’s how we like it”.

Gerbera grower Hen Groenewegen from De Lier ran a successful family business together with his brother Erik for several years, and the company was merged with Van Veen Gerbera in 2014. Very recently, Barendse Gerbera strengthened its ranks and the company gained a five-person board and a new name. EveryD Flowers has a cultivation area of 12 hectares, spread out across three locations in the Westland region. Just like its legal predecessors, the company is a member of the Colours of Nature growers' association.

From slabs to containers

Gerbera plants grow on the same substrate for several years. The first cultivation phase involves strong vegetative growth. For this reason, the substrate must promote rapid root penetration and smooth, fast growth. Previously, substrate slabs with several plants were the usual practice, while today, containers with just one plant are the rule.

“Containers offer additional flexibility and minimise the risk of disease spread and plant loss”, explains account manager Aryan Aziezie. He succeeded Dennis Raadschelders and is the new face of Grodan within the ornamental plant cultivation sector. “In addition, plants in containers do not have to compete with one another for water and nutrition, meaning they perform better. The spacious, airy root volume and the positive water balance in the Grodan Grofit substrate support that”.

Groenewegen says: “In the past, we had five plants on one slab. If something went wrong somewhere and a plant was affected by a root disease, the neighbouring plants were often affected too. But with plants grown in containers, you can replace diseased plants individually”.

In 2005, the Groenewegen brothers and other Colours of Nature members made the switch from stone wool slabs to Grodan Grocube in pots. The small, airy stone wool cubes for ornamental crops in pots and beds worked well. Six years later, the stone wool manufacturers from Roermond introduced Grodan Grofit, which was especially developed for gerbera cultivation. It consists of the tried-and-tested GroCube cubes covered by a 2 cm thick stone wool disk c, offering the plant more firmness during harvesting. Part of the new substrate concept was that it was offered ready-to-use in pots according to customer specifications.

“We noticed right away that we had to add more water”, says the Westland grower, looking back. “As it transpired, Grodan's potting company in Breda filled the pots using a slightly different method than we were used to. Because our colleagues were experiencing the same problem and we bought the substrate as an association, we raised the issue with the supplier as Colours of Nature”.

Following some firm negotiation, things went well. The group of growers visited Breda a few times prior to the start of the second season to come to the right arrangement with the potting line team. It quickly turned out that the cubes had to be pressed a little harder, meaning that more cubes fitted into the same volume. “This resulted in a higher buffer capacity, meaning that we could better control the drip frequency and drain volume”, summarises Groenewegen. “In the next crop, we saw that after a few months, the leak had been plugged and that Grofit was doing a great job. The stone wool disk gives the substrate added value; it seals off the upper edge of the pot nicely, meaning the plant is firmly supported during harvest”.

Aziezie knows the story. “The optimisation of potting up goes hand-in-hand with upgrading quality assurance within Grodan”, he says. “Improving the quality of the product has always garnered a great deal of attention, but since then, customers have become even more closely involved. Their experiences and feedback help us to better guarantee the quality of our products and services. Our cooperation with Colours of Nature is a fantastic example of this”.

The interplay appears to be even broader. EveryD Flowers start the new crops off with fairly large plants from the extended propagation period, which occurs at a specialised company. “This is where the first cultivation phase takes place”, explains the grower from De Lier. “The growers receive the plant material in a plug from the propagator and the new pots from Breda, after which they take care of the planting, ensuring fast rooting and adequate initial growth”.

Raising the young plants is specialised work involving several phases, with subtle differences when it comes to growing conditions and irrigation. Groenewegen follows the process and makes regular checks, but does not need to free up space and manpower in his own company.

“Another advantage is that we can use our greenhouses to their greatest potential for the crop”, Groenewegen continues. “The plants come into production quickly and then have to stay that way for about three years. The substrate plays an important role here. Cheaper alternatives are available, but there is uncertainty as to whether this produces a comparable return. Grofit is tailor-made for gerbera cultivation. We couldn’t do without it”.

Grodan Grofit is a porous substrate consisting of stone wool cubes covered by a solid stone wool disk. For ten years now, it has been a tried-and-test, stable and reliable growing medium for gerbera cultivation. 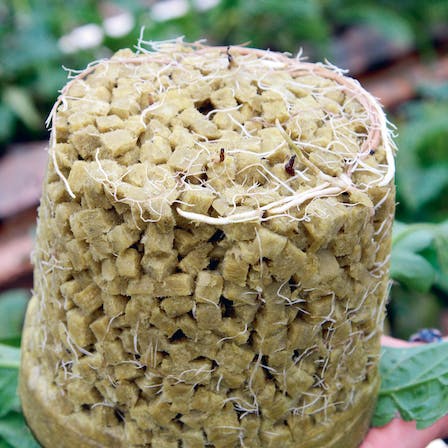 The best substrate for ten years

A peek behind the scenes at Grodan

Have you ever wondered what happens behind the scenes to ensure that you receive the Grodan products you’ve ordered? Find out by reading a series of interviews with some of the people involved! In this edition, we spoke to Huub Hermus, Key Account Manager Vegetables for the west of the Netherlands.

Crop registration is a key activity in your greenhouse in order to know how your crops are growing, based on this information you can set better your growing strategy and adjust whenever it’s needed. Watch the video’s below to discover more about why crop registration matters and how it’s applied in practice at the Dutch tomato greenhouse company ‘Van Rens’.

Thanks to our long-standing partnership with Grahame Dunling, we will soon be supplying our stone wool growing media to the world’s biggest vertical farm. We spoke to Grahame to hear more about his international crop-growing initiatives and his ambitious plans to become the ‘Starbucks of the salad industry’.